[This piece was originally published in the State Journal in February, 2017]

The West Virginia Capitol is a crime scene. Hundreds of millions of dollars have been stolen. So where are the cops? Have they got any leads? When will the perpetrators be brought to justice?

It’s not some kind of brilliant caper we need to solve. Thieves took the money in broad daylight while their friends cheered them on. They wore no disguises – just the usual suits and ties – and there was no getaway car – most of them are still right here in town.

Here’s some people who definitely don’t have it: West Virginia’s children and their schools. They’ve been cut so much buildings are falling down and closing, and hundreds of teaching positions are unfilled. Here’s some other folks who don’t have it: the nearly 1 in 5 West Virginians living in poverty. Also decidedly not holding onto to our $900,000,000.00 are West Virginia’s working families, trying desperately to keep their heads above water.

Who’s got the money? It didn’t just up and walk away.

West Virginia’s political leadership knows where the money went. It went to very wealthy corporations and rich people. They had quite a bit already, but as of now, their pockets are about $900,000,000.00 heavier (and counting). They got that money through a series of special favors and tax cuts. West Virginians gave them all that money and what did we get in return? A bunch of worthless promises.

Politicians in both parties and their rich friends making big money in business told us that tax cuts on the rich would “increase[] revenues in the long run because it spurs economic activity.” Well the long run has arrived. The people of West Virginia held up their end of the deal, but the businesses and tycoons that pocketed all that money are just shrugging.

When hundreds of millions in tax breaks were being handed out, working West Virginians weren’t “family,” because families share in the good times and bad. But when things were good, the breaks all went to the one-percenters. Now that times are tough, suddenly we’re all “family.”

How do the politicians plan to scrape together the $600,000,000 for this year? If you follow their plans, so far, not one proposal involves getting it back from the people who have it. Instead, there’s a lot of talk about “sacrifices we’ll all have to make” to pick up the check for the wealthy interests that always seem to disappear when the waiter brings the bill.

Cuts are proposed to education, policing, infrastructure and all manner of public services. In other words, anything being done to serve the state as a whole, or that benefits the average person, goes on the chopping block first. The idea that the those tax breaks should be rescinded or reversed until the money comes back? Forget it. They didn’t get rich giving money back and they aren’t about to start.

Our new Senate President, Mitch Carmichael reportedly “welcomes” the chance to cut public services – “it’s something we’ve needed to do for a long time,” he says. You might see schools and roads that are dilapidated and even dangerous, but right-wing politicians see them with Wile E. Coyote’s eyes: like there’s a big beautiful turkey inside for them.

Imagine coming home to find your house has been robbed. You call the police and instead of chasing down the crooks, they start picking over what’s left behind. They start telling you what you have left is awfully nice stuff, that you’ve been living a little large, and they’re going to just take about twenty percent of it. That’s how our political leaders see the state budget.

Meanwhile, the folks who have all the money we’re short – they haven’t left town. They have a new friend in Senator Robert Karnes. Karnes has a new tax committee he’s working on for Carmichael and I’ll give you three guesses what it’s planning to do, even though you’ll only need one. That’s right, they are planning additional tax cuts for the rich. What do we get in exchange for wiring even more of the money we don’t have into the pockets of the wealthiest West Virginians and their corporations? More promises.

Don’t believe these people. Don’t believe anyone who tells you we’re “all in this together” when what that really means is you pay a more and get less, while their friends walk away with millions that should have gone into our schools, our roads, and our public services. When they tell you “there are no good choices here,” what they mean is they are afraid to tell those rich corporations to give the money back, so they are taking it out of you.

The West Virginia budget is a crime scene. We need an investigation into who took the money and how we can get it back, not another round of painful cuts inflicted on people who didn’t create this problem in the first place. The working people of this state, and those desperately seeking to work to build a middle-class life don’t deserve one dime of cuts to their services. The children of this state, far too many of whom are living in poverty, should be getting increases in what we do for them, not cuts. Our teachers and police who have earned their pensions should receive them – not have them looted to bail out the politicians.

When Willie Sutton was asked why he robbed banks, he said “because that’s where the money is.” It’s time we fixed our budget the same way: by looking for our money where it actually went. 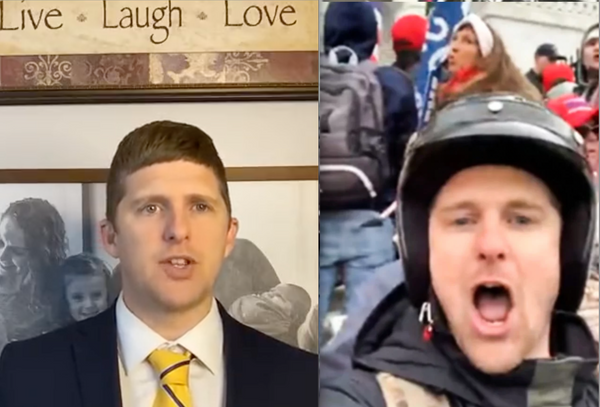